Blue Planet is here to help companies with their energy transition to zero-carbon hydrogen solutions. 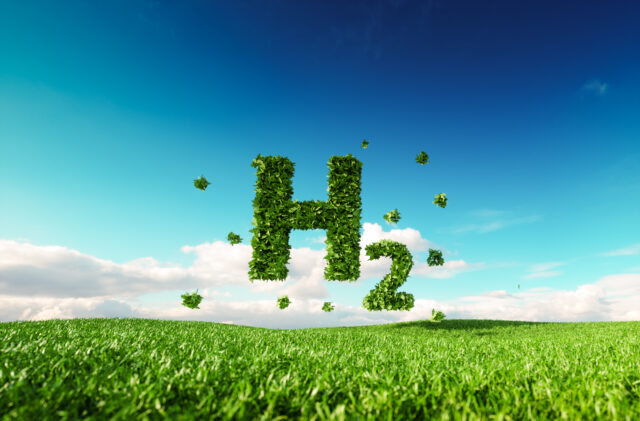 Blue Planet specialises in developing a research plan that provides our clients with all the necessary information on how an existing or a new business can utilize Hydrogen solutions in their functions.

Furthermore, Blue Planet has the expertise to help clients implement all the above solutions and make the best out of the research plan that is proposed.

The industrial zone as is, relies heavily, if not exclusively, on Hydrocarbons. Hydrocarbon thermal machinery such as Spark Ignition-Compression Ignition engines, Gasoline-Diesel generators, Coal-Lignite gasifiers, residential diesel-powered heating systems, Pyrolysis units and so on, are commonly met all around the planet. Such technology practically oxidizes Hydrocarbon to produce either heat, steam or useful mechanical work depending on the application, though energy losses are not, by any means, insignificant. The downside of Hydrocarbon thermochemical exploitation can be summarized as follows, 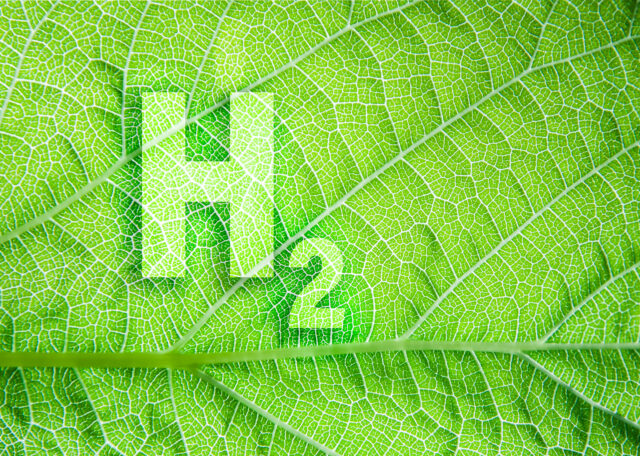 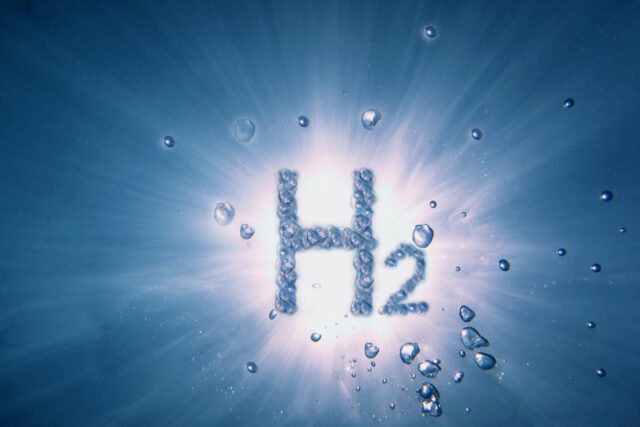 Hydrogen as an Energy solution

Hydrogen has an important role to play in today’s Linear Economy, indicatively, the Petrochemical, Pharmaceutical and Food industries utilize it in various processes as shown below,

Hydrogen can be further utilized in order to fuel a Circular Energy Economy as it abundant beyond measure (appx. 75% of all matter in the universe) and carbon free regarding it’s stereochemical-molecular structure. It is important though to view Hydrogen not as a fuel but as an Energy carrier for the replacement of conventional Energy carriers like Batteries. As shown below, Hydrogen makes for an excellent energy carrier as compared to any other existing alternatives. 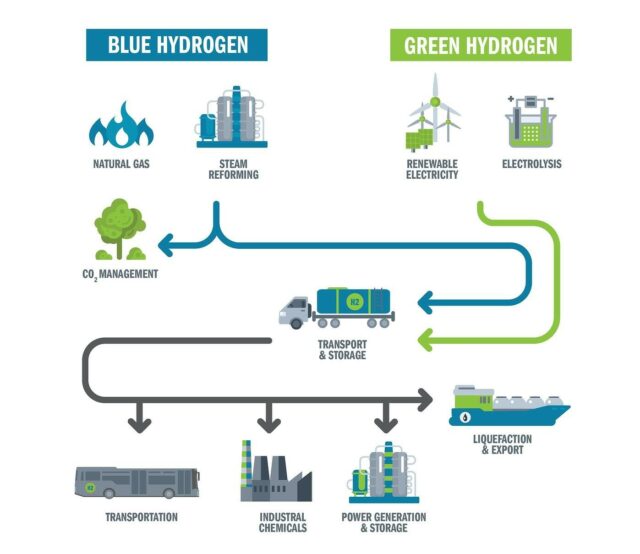 Representation of the Hydrogen Colors

Hydrogen can be produced through various processes, most of today’s hydrogen production comes from fossil fuel processing, namely Coal Gasification, Methane Steam Reforming and Petroleum fraction partial Oxidation. Hydrogen produced by these processes is classified as ‘Grey’ due to the gaseous pollutant emissions although it is important to note that if Carbon Capture and Storage technology were to be implemented, then the produced Hydrogen would be classified as ‘Blue’. ‘Green’ Hydrogen can only come through a process that, in all aspects, is zero-emission, the most well known system that can produce it is an R.E.S. powered Electrolysis module.

M.S.R. is a thermochemical process, during which methane molecules react with water in the form of steam at temperatures, often above 1073,3 K in order to produce hydrogen gas, followed by another stage at which the produced carbon monoxide reacts with water in the form of steam to produce carbon dioxide and hydrogen gas (again). This process accounts for 48% of the total amount of hydrogen produced per year, but given hydrocarbon deposits are declining it is imperative to limit this percentage as, given the technological evolution of electrolysis units, it would be counterproductive to consume an existing fuel (CH4, LNG as a compressed gas Fuel for internal combustion engines) while producing Carbon Dioxide in the process. Clean hydrogen production is essential if at any point we strive for a Carbon-free industry.

Coal gasification is a practice, through which 18% of the world’s hydrogen production is achieved and shares basically the same principle as P.OX, in particular Coal reacts with pure oxygen in the presence of water vapor, from the reaction arises carbon monoxide, carbon dioxide, diatomic hydrogen and impurities. Subsequently, and after the impurities have been separated, carbon monoxide, through the Catalytic Shift Reaction, produces hydrogen and carbon dioxide. The Hydrogen is then separated.
Coal Gasification reaction :
CH0.8 + O2 + H2O → CO + CO2 + H2 + Coal Residue 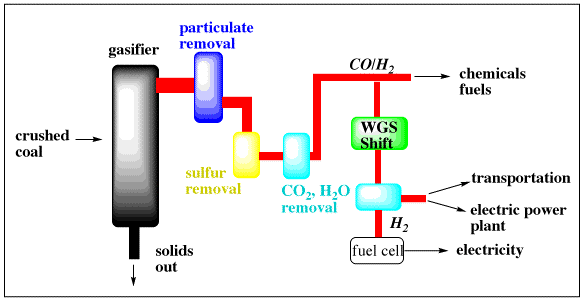 POX is a hydrogen production method based on the oxidation of a particular type of hydrocarbon in the presence a controlled amount of oxidizing agent in the form of pure oxygen, so as to produce carbon monoxide and hydrogen, as opposed to complete oxidation that would correspondingly produce CO2 + H2O. The reaction takes place under very high pressure (typically between 1300-1800 psi). Hydrogen is produced by the catalytic shift reaction of CO while any residual amount of Carbon Dioxide is absorbed via a basic solvent. This practice is responsible for producing 30% of the world’s hydrogen production.

Electrolysis of water is a well-known hydrogen production technology through the breakdown of water molecules into individual synthetics (hydrogen and oxygen). The devices that separate water by means of an electrical charge are electrochemical and consist of two electrodes(anode, cathode) and an external electrical circuit, connected the electrodes. The Water requires the addition of some chemical compound so that it becomes more electrically conductive and receptive to the process. The principle of operation of the device in question can be summarized as follows, 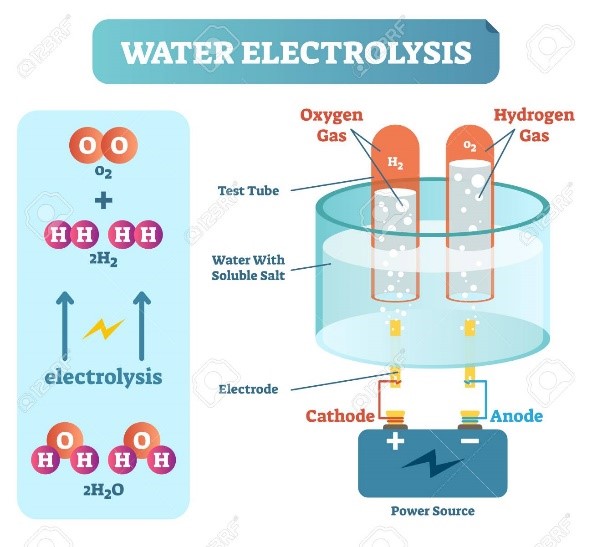 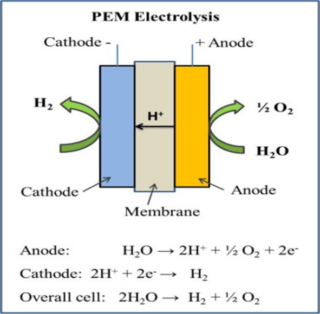 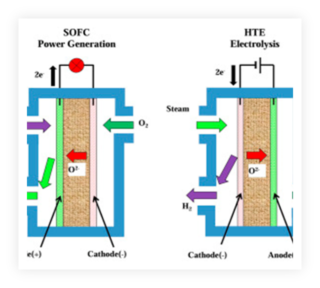 Organic waste is another source from which Hydrogen production can occur combined with the fact that waste management is a vital area of industrial activity. The recovery of energy from wastewater is not a new technology, the scientific community has invested in the subject and there is power generating electrochemical technology based on the degradation of the organic fraction within the wastewater volume by specific microorganisms under anaerobic conditions, these devices are called Microbial Fuel Cells (MFC), however, a similar technology has also been developed for the production of hydrogen or methane (Microbial Electrolysis Cells). The device in question functions as follows.

Commonly used materials for electrodes are the following

Such technology cannot not be characterized as zero-emission as the production process involves carbon in the form of organic compounds, therefore although hydrogen, which can be a pure form of energy, is produced and while it is advantageous to apply renewable energy technologies, as a small amount of electrical power is required by the device, carbon dioxide emissions remain, in this context Carbon Capture and Storage systems can be implemented so that the environmental footprint of this technology is reduced to a minimum. 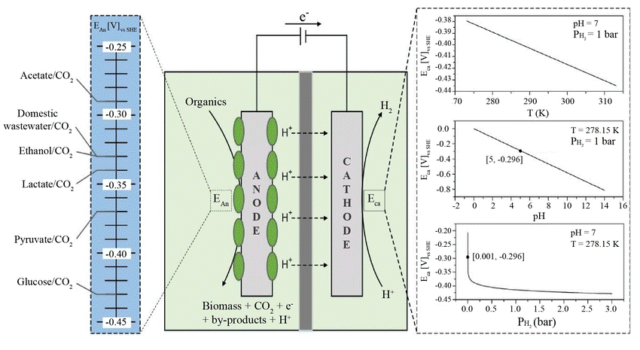 Plastics can be directly converted to Hydrogen and Carbon Nanotubes through a process where polymer waste is shredded and mixed with various metal-oxides(Fe, Al) that catalyze the –to be initiated- reaction, the mixture then is exposed to microwave radiation that results in carbon nanotubes and a gaseous fraction composed of 97% pure Hydrogen. The reasoning behind this process’ success is the fact that polystyrene(often related to human cancer), polyethylene, polypropylene are not at all affected by the radiation which means that the catalysts are excited to the required degree.

Direct conversion of Plastic waste to Hydrogen and MWCNT 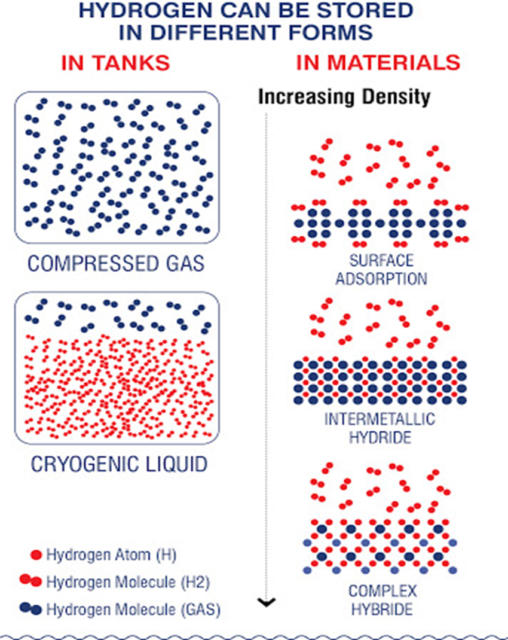 Hydrogen can also be stored in Ammonia due to the fact that 3 Hydrogen atoms are binded to each Ammonia molecule.

Hydrogen can be utilized electrochemically or thermochemically, The corresponding technologies are shown below.

Hydrogen fuel cells are electrochemical devices, that exploit a series of chemical reactions to generate electricity. Fuel cells operate on hydrogen and oxygen (supplied as a component of air). The 1990s were marked as the first period when mass production and widespread utilization of the fuel cell began. It is also important to mention that the global capacity for electricity produced from fuel cells is estimated to be between 1GW and 2GW. A conventional fuel cell contains an electrolyte and two electrodes. The electrolyte acts as a semipermeable membrane that allows the passage of positively charged atoms(such as protons). Diatomic hydrogen is characterized by a neutral charge, therefore, in order to penetrate the membrane, the catalyst acts in order to separate the electron from the proton (H+). Protons are now able to penetrate the electrolyte, however, in order to react with oxygen, the electrons detached from the individual hydrogen atoms must be transported to the cathode chamber, the transfer is completed by means of connecting an external circuit to the electrodes. The byproducts of such a device are water and heat. 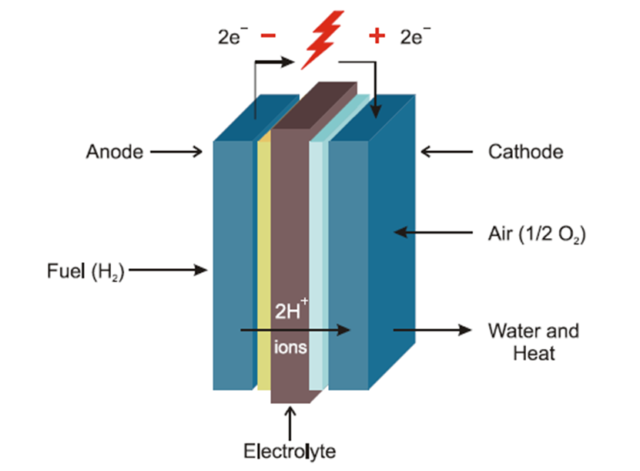 We can summarize the FC operation principle as shown below,

It is easy to see that hydrogen fuel cells are capable of powering any electricity–supplied system, be it a household appliance, a heating system, or use in the various energy-intensive applications of individual or industrial activities (Transportation, Metallurgy eg.)

The excessive use of hydrocarbon internal combustion-gasification technology for the bulk of industrial applications over the last three centuries, almost exclusively, bears responsibility for the impending Climate Change as The Greenhouse Effect has become a global issue in recent decades. Technology for production of mechanical energy-useful work through exploiting an expanding gaseous mixture is one of the most important technological breakthroughs and it is possible for it to continue to be widely implemented, with the prerequisite of drastic reduction and eventual annihilation of emissions of gaseous pollutants. In this context, Hydrogen can replace Hydrocarbons of all types and meet the requirements of each application without producing CO2 as it ignites. It is a fact, however, that the HICE Powertrain (Hydrogen Internal Combustion Engine) differs compared to a conventional diesel or petrol internal combustion powertrain. There are commercially available models of such engines and the imminent imposition of fines for the owners of machinery or means of transportation that produce Greenhouse gas emissions makes the internal combustion of hydrocarbons an extremely short-term, non-viable solution, especially as technological development allows cost-competitive mass production of hydrogen, which is directly usable and able to meet energy needs without polluting the environment. 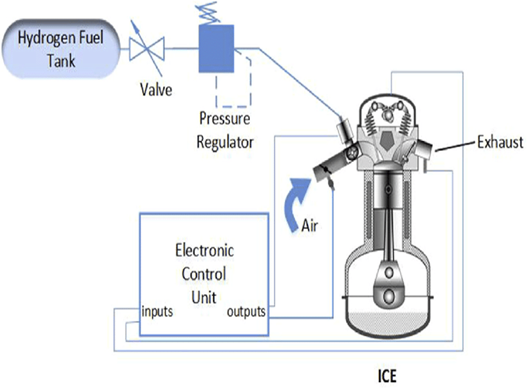